The tea, which has a 5000 year old tarie, although it entered the life of the Turks late, entered the clean. Besides tea drinking throughout the day, we can not ignore that we add to the culture history of tea with our additives such as our own brewing method, thin glass cups, curing tea. One of these is the requirement that the steaming beef, which is one of the indispensable rules of good tea steaming, is placed on the teapot and can not be resolved gracefully.
Despite that; to prevent the pain of the tea and the deterioration of its taste; After we have brewed, we drain the tea and drain it to another bean, which is another side of the business.

Not in Turkish tea culture; American invention bags tea, tea balls and nets, more aromatic teas, to put a lot of milk and lemon in the tea, to chew tea in a metal teapot, to act sloppy.

Hodja Ahmet Yesevi becomes a guest of one of the Turkestan kings on the border of Hıtay one day. It was very tired that the weather was very hot that day. The Turkmen who are the guests of the house are about to give birth to the neighbor's taste. Turkmen asks prayer from Hodja Ahmet Yesevi and Ahmet Yesevi as well. With the permission of Allah, the request of the Turkmen takes place immediately. Turkmen is very pleased with this situation. He brings boiling tea, which is an important bonus for the party. Hoca Ahmet Yasevi tea goes to hot hot sweat and tiredness. Then he said, "Take this healing thing, let your sickness drink from it, and Allah is good at it as much as the doom." Here tea is now used among all the Turks and has become a healing drink.

Tea plays an important role in folk culture and ethnography. Tea has been solidified in our social life until it can not fill its place, and it lives with the culture that is formed around it.

Tea in our lives until the late hours of the morning and breakfast caused the emergence of various cultural values.

About tea; manners and turks, legends, legends, traditions and customs are cultural values ​​in themselves. In fact, even though the tea word is Chinese, it has reached a large number of words and phrases found in dictionaries and idioms. Such as Tea, Tea Garden, Tea Glass, Tea Demlemek, Tea Cup, Tea Nursery, Tea Fountain, Tea Spoon, Tea Set, Tea Making, Tea Molten, Tea, Tea, Teapot, Tea, Tea, Tea, beside the words; Rabbit Blood Tea, Drinking Tea, Restraining Tea, Cray Höpürdetmek, Tea Catering, Pasha Cray has caused the emergence of such phrases.
The cultivation of tea, from the cultivation to the consumption of the tea, revealed a tea ethnography. Scissors, baskets, boxes, teapots, samovars, tea boilers, cups, cups, spoons, trays etc for cutting tea. all ethnographic materials that are formed around the tea cult.

The most important of these is the umbrella culture we can not distinguish from the tea itself. The samovar began to be widely used in Central Asia from the 19th century. With the inheritance from Ahmet Yesevi, it is believed that the tea is healing, and it is believed that the saberan is also a healer. People are seen as a life, a talkative, a sorority to troubles. Samarin was so believed that he was able to heal him, so that he could boil the samovar and drink tea to relieve people at the entrance of the bath and in the Mevlids. Samovar also has a place in our literature. Samovar is likened to the healing power.

Until now, my homey coffee and tea gardens have begun to be served in porcelain or glass cups, with the "cups" being taken care of by the glass cups. In addition, tea bags of course entered the life, "cafes" in some of the houses in addition to our 100-year tea brewing procedures, raffia immediately lifted, tea bags began to be introduced at the fin. From God, it is now beginning to comprehend that it is not very clever to offer tourists tea bags in porcelain / ceramic fin. I do not know if this is the effect of the news that "Greeks are giving tea in thin glass cups" but recently, glass cups have started to be used in tea gardens even though tea gardens are not ideal size. That's why the big glasses called "Ajda Pekkan Kardas". But of course there are small, thin glasses that lie in the hearts of real tea lovers.

If we recall that we have added tea to our culture history with our additives such as brewing method, thin glass cups and curing tea as well as our tea drinking throughout the day, we can not deny that we have legends, our turks, our friends and our manners ...

Is not it mentioned about Erzurumlu when talking about tea? Casserole grows Rizeliler. But the dander also drinks Erzurum. In Erzurum, tea is another drink. Everybody drinks tea but another tea from Erzurum. Drink and drink ... what do you say ...

The bottom of the teapot is a kaymak. It keeps boiling constantly. It can even overflow if unattached. 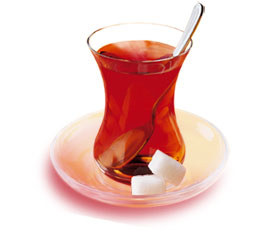 As the upper teapot grows and the lower teapot boils, the heat increases in it, but it ripens in time and is demoulded.
The bride's husband is a cup.

Fill it with a little bit of booze and come for a bit, for this reason it is balance.

The open or brewed tea does not go well.

Kids are sugar, sugar. Too much sugar,

One of them gets too much for those who are not eating without sugar.

The acne is tea spatter. Every once in a while the income goes.

As for the father-in-law, he is the tea tray. Tea does not mix with demine water.

Sit like a leopard on an edge. It only prevents spills from collecting and damaging the environment.

Tea strains are worth having a family. Protect the family from external interventions. If the holes are large, the tea will taste.

The fire that heats the water is tolerant. No tea without it.

It does not have a cup of tea drinking on the mood.